School bus conversions are growing in popularity as more people see the benefits of tackling a DIY RV project from the ground up, like do-it-yourselfer William Bailey. This brand new full-time RVer is a computer programmer who recently wrapped up a major two year “Skoolie” renovation project. Today he’s living his dream of traveling around the U.S. in a converted school bus with his best friend, Durango. 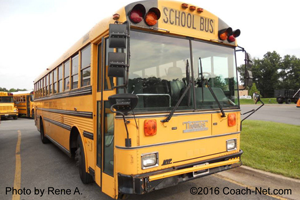 Although he’s no stranger to camping or RVing, Bailey had never tackled a Skoolie conversion before.  He had his work cut out for him when acquired a 34-foot long 1999 Thomas Saf-T-Liner MVP ER diesel-powered school bus at aschool bus auction in 2013. The school bus had low miles and was treated with care, but it needed everything from insulation to house systems to make it livable. For a special touch that would make it 100-percent unique, Bailey raised the roof to make the living quarters more comfortable.

Two long years after diving into his epic RV bus conversion project, the mechanically-inclined Bailey and his loyal co-pilot Durango hit the road for good. But before they went anywhere, Bailey purchased a Coach-Net Emergency Roadside Assistance Plan.

“I researched it (roadside assistance plans) for a while on the Skoolie.net forum,” he remembers. “The overwhelming choice was Coach-Net.” Bailey discovered that Skoolie owners appreciate how Coach-Net offers both towing and trailering options for large RVs. “And you can’t beat the cost,” he adds. 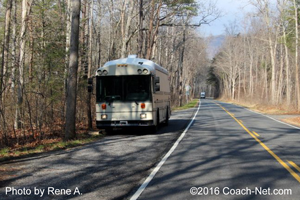 Bailey’s new life was off to a great start until a major mechanical issue happened on a shakedown trip just before Christmas. “I first noticed the oil leak at a gas station,” he recalls. “I could see the drips on the pavement. I checked the oil and it was only down a quart. I made the decision to keep driving and check it later to see how bad it was.”

When the bus engine wouldn’t start the next day and a “Low Oil” indicator light flashed, Bailey knew it was time to rely on his Coach-Net Roadside Assistance Plan. But instead of panicking, he could relax because this wasn’t his first experience with Coach-Net. Several months earlier when his bus had brake problems, Bailey relied on Coach-Net’s free RV Technical Assistance Hotline to help him diagnose the issue. The Coach-Net technician guided him every step of the way.

“I learned how my whole break system worked,” Bailey remembers. “He walked me through using a hair dryer to see where the air was not moving. Through this I discovered that I have a heater on the air dryer that failed, a $70.00 part I was able to order and replace myself.”

This time around when Bailey realized he needed a mechanic, he knew he was in good hands. “Coach-Net does all the leg work for you so that is a plus. The overall experience is very good. They first ask you if you are in a safe place. If not, they get you help right away,” he says. He and Durango were safely in a campground, so he was able to wait until the following day to get his bus trailered to a shop..

As the situation unfolded, Bailey was impressed at how quickly his Coach-Net representative located a mechanic that not only works on buses, but was an expert on the very same engine in his Skoolie. “When you are dealing with the stress of a break
down it is nice to have someone helping to line everything up for you,” he says.

With all the confidence he needed to proceed, Bailey had his bus moved to the mechanic’s shop that could fix the issue. And although the day started off badly, everything worked out well. “The bus got towed to

Dossets in Anderson Indiana,” he wrote on his Facebook page. “A very friendly bunch, they will even let me plug in to live in the bus while they work on it.”

Less than a week later, Bailey
was on the road again. Today he and Durango are officially full-time RVing and spending winter in sunny Florida, where he works from home as a computer programmer with an oceanfront view that can’t be beat.

Rene Agredano, a Coach-Net member since 2015, is a self-employed full-time RVer who enjoys writing, jewelry design and animal advocacy. Her adventures with a three-legged dog and husband Jim are chronicled at LiveWorkDream.com.