Navigating your RV through urban traffic is never fun, but toss in an RV trailer tire blowout at the same time and things can get life threatening if calm heads don’t prevail. The strength of your RV driving skills is measured by how you handle unpredictable situations like blowouts. Unfortunately the only way to determine where you stand is to actually experience one of these calamities, which is exactly what happened to us while maneuvering in a mess of interstate traffic.

Recently one Saturday morning we headed to an RV park on the fringes of Austin, Texas. Proud of ourselves for timing our arrival perfectly, it was about 10 am and interstate traffic was light and easy. After camping in rural West Texas for several weeks, it was nice to emerge into civilization without rush hour madness. Traffic got tighter as we approached Austin then sadly our casual entrance came to an end. That’s when my husband Jim looked left and saw a passenger in a neighboring car waving her arms at us. 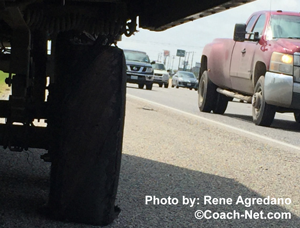 I would have panicked and hit the brakes, but Jim knew what to do.

As fast and safely as he could without slowing down too much, he steered us out of the middle lane toward an approaching off-ramp. Unfortunately we were moving too fast to exit and missed our opportunity. The narrow freeway shoulder was the only place left to stop.

Despite our meticulous tire care maintenance, stuff happens and now it was time to deal with the problem. In nine years of full-time RVing it was only our second high speed blowout. But things were different this time: now we carry Coach-Net’s Hazard Protect tire and wheel coverage. After taking a minute to catch our breath, I did what most wives will do in the same situation: I told Jim “Call Coach-Net!”

And of course, Jim did what most husbands will do: “I can change it!” he grumbled. You can probably imagine the bickering that transpired as we sat there arguing while every passing car shook our rig.

“No you can’t do that! Not here!” I demanded. “Yes, I CAN!” he insisted. But like all caring and concerned wives, I pointed out that if he went through with it, there was less than than five feet between his body and 75 mile-per-hour traffic. 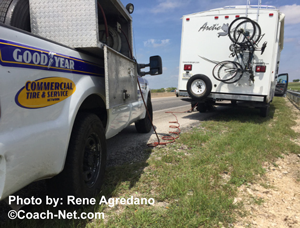 “We have Coach-Net! That’s what it’s there for!” I pleaded. “You have good life insurance but I really don’t need a dead husband!” I added for extra drama. Maybe that’s what did it, but he relented and with a grumble said “Fine, call them.”

While sitting and waiting for the ordeal to be over, we got acquainted with our coverage. What a relief to learn that because a road hazard caused the blowout, our tire would be replaced – on the spot – with a new one, at no cost. To add to the perks, the repairman arrived with a heavy-duty Goodyear tire that was better than the 6 month old one that failed. 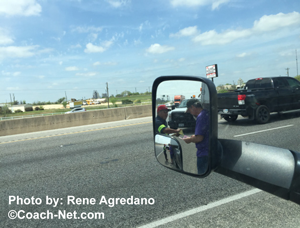 Waiting for it to be over was the hardest part, but we learned much from the experience. For starters, watching the repairman do his job made one thing obvious: he knew exactly how to park diagonally behind us so that if a car hit us all, his truck would take the impact first. Those RVers who try to do it themselves without a buffer of protection on the freeway practically guarantees a tragic outcome.

We arrived in Austin later than we wanted, but my husband, dog and I were safe and that’s what mattered most.

Rene Agredano, a Coach-Net member since 2015, is a self-employed full-time RVer who enjoys writing, jewelry design and animal advocacy. Her adventures with a three-legged dog and husband Jim are chronicled at LiveWorkDream.com