It’s time to celebrate!  The National Park Service turns 100 on August 25, 2016. In honor of this amazing year, we are launching a 12-part series dedicated to the enjoyment and beauty of our glorious national parks.  Stay tuned each month as we continue the celebration with park highlights, destination ideas, and general good-to-know information.

History of the National Park Service 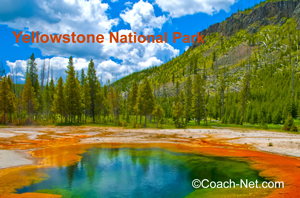 The Act of March 1, 1872 established Yellowstone National Park as a public park.  This founding created a worldwide park movement.  Following the establishment of Yellowstone, the United States authorized additional national parks and monuments.  Some were administered by the Department of the Interior while others were administered by the War Department and the Forest Service of the Department of Agriculture.  But, no single agency managed the various parks and monuments.  On August 25, 1916, President Woodrow Wilson signed the act that created the National Parks Service.  This new federal bureau is responsible for protecting and managing all national parks and monuments.  It is now made up of more than 400 areas, covering over 84 million acres in 50 states, the District of Columbia, American Samoa, Guam, Puerto Rico, Saipan and the Virgin Islands.

Most national parks have been established by an act of Congress and the president confirms this by signing the act into law.  All parks are to be of national importance and should meet the following criteria:

The National Park System receives over 280,000,000 visits each year and visitation is continuing to grow.  According to the 2014 Annual Park Ranking Report for Recreation Visitors, the ten most visited areas of the National Park Service handle 28% of the visits to the 400+ park areas.  The #1 ranked national park is the Golden Gate National Recreation Area with over 15 million, followed in 2nd by the Blue Ridge Parkway with over 13 million visits.

Over 13 million visitors spend the night in one of the national parks, including those who stay in lodges, tent campers and RV campers.  Over the last 30 years, the largest increase in overnight visitors has been RV campers.  The most popular park for RVers is Yosemite National Park with over 160,000 RV campers followed by Lake Mead National Recreation Area with over 140,000 RV campers.

We encourage everyone to visit at least one National Park.  There is plenty to learn, see and do – you will be inspired!  Be sure to participate in Find Your Park Experiences as you have fun in national parks.  So get outdoors and Find Your Park!