The total solar eclipse taking place on August 21, 2017, has been named the Great American Eclipse because it will follow a path across 12 states. Americans haven’t had such easy access to a total solar eclipse since 1918. The country has experienced several eclipses since then, but none have followed such a long path across the United States.

Millions of people will travel to see the Great American Eclipse. Before you go, stop to think about how amazing the experience is.

Other planets experience eclipses, but they don’t look as fascinating as those on Earth. Mars provides an excellent example of why other planets miss out on this amazing phenomenon. When the Curiosity rover took pictures of a solar eclipse seen from the red planet, the images showed that Phobos, the larger of Mars’ moons, only covered a portion of the sun.

Since Earth’s satellite has the perfect position and size, it can cover the sun, creating a midday twilight unlike anything you’ve ever seen.

What Occurs During a Solar Eclipse

A total solar eclipse occurs in several stages. At first, the world around you will start to darken. It will begin to feel like late evening even though your clock will say it’s morning or early afternoon, depending on your location. The moon’s path creates such a convincing effect that birds often return to their nests to sleep.

Just before the moon completely covers the sun, you will see a phenomenon called Baily’s beads. Baily’s beads look like bright diamonds along the moon’s side. The effect is caused by sunlight passing through one of the moon’s mountain ranges. When the light flashes between the mountains, people on Earth see brilliant spots.

Baily’s beads will disappear as the eclipse reaches totality. At this point, the sun’s corona becomes visible. Typically, the sun’s bright light makes the corona impossible to see from Earth. At the moment of totality, it shines clearly like a diamond ring.

As the moon continues its path, the sun returns, leaving you to marvel at what you’ve witnessed.

Staring at a solar eclipse will damage your eyes unless you take some precautions. Solar glasses, which cost a few dollars, are the only glasses that can protect your eyes. Do not look at the sun unless you have your glasses on.

You can also make a pinhole camera to view the eclipse, but you won’t see the process as well as people who wear glasses.

Once the moon completely covers the sun, you can remove your glasses and view the event safely. It’s a marvelous sight that you don’t want to miss. As soon as the moon begins to pull away from the sun, you should put your glasses back on to avoid injury. 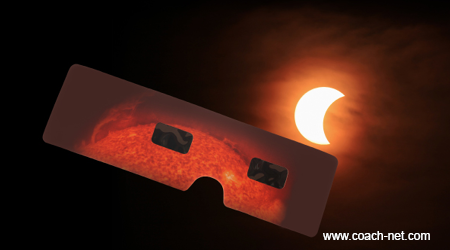 Where to See the Great American Eclipse

Since the Great American Eclipse will visit so many states, you won’t have to drive very far to witness the event. Some of the best places to view the eclipse include:

Totality will last about two minutes in most locations, although some will experience slightly longer or shorter durations. At 2 minutes and 41.6 seconds, Carbondale will have the longest totality.

The Great American Eclipse is your last chance to see a total eclipse within the United States until 2024. Unfortunately, the 2024 eclipse won’t visit the western states. The 2017 eclipse is a unique experience that deserves your attendance. Get a pair of eclipse glasses, fuel up your vehicle, and go see this marvelous event.

Ricky R. ~ “Just wanted to let you know that we had a tire go out on a recent trip to Florida, and for the first time, was able to use my Coach-Net services.  Not that I really wanted to ever use this, but that is the reason we have it.  We contacted Coach-Net and was assisted by Kristen, who was in constant contact and extremely patient and helpful during our whole, stressful event.  Being broken down somewhere strange is not very comforting.  She was able to source a tire repair service along with a new replacement tire, which was covered 100% under our plan.  Kristen kept in touch up until the repair service arrived.  We received an automated call verifying the repair was done and go back on our way.  There are so many horror stories about poor service and customer support with roadside plans, so I thought I would share a GOOD story and great outcome.  Thanks, again, for great coverage and excellent employees who care.”